A project supported by the South West Academic Health Science Network (SW AHSN) that could revolutionise care for Parkinson’s patients and staff has been launched at a national event.
Entitled Developing Home-based Parkinson’s Care, and led by the University of Plymouth and University Hospitals Plymouth NHS Trust (UHPNT), the project will focus on co-designing a new service to help Parkinson’s patients, carers and healthcare staff monitor a person’s condition remotely – ensuring care remains person-centred, while improving wellbeing of healthcare staff. 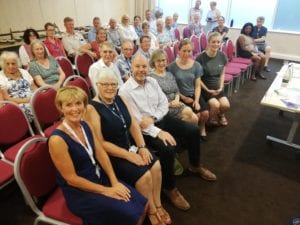 The launch, reported by the BBC, took place on 23 July at Future Inn in Plymouth, following the recent announcement of £75,000 funding from The Health Foundation and £15,500 from a Parkinson’s UK Excellence Network Service Improvement Grant.
The event (pictured right) brought together people with Parkinson’s, their families, healthcare teams, technology experts and project partners to ensure that care delivery really meets the needs and expectations of people living with the condition.
Why is the work necessary?
Current guidelines from the National Institute for Health and Care Excellence suggest that people with Parkinson’s should receive specialist review at least every six months, usually provided by a consultant and community Parkinson’s disease nurse specialist (PDNS). But a recent audit of patient experience, conducted by the project team, found that 46% have consultant appointments delayed by more than six months, and 60% have not seen the community nurse within the last year. Some regions of the UK don’t have the specialist service, and 50% of vacant PDNS posts are due to long-term sick leave or resignation.
What will the new service look like?
The key aim is to bring together necessary stakeholders (people with Parkinson’s, carers, researchers and PDNS) to co-design the service. One of the main focuses will see patients use a wrist-worn device known as a Personal Kinetigraph (PKG®) (pictured below) to help them and a specialist team monitor their condition at home. 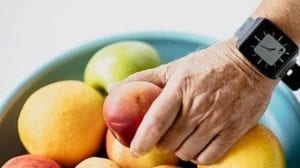 The service will work better for healthcare staff by removing some of the frustrations and isolation of working in the current system, and will also deliver an education package, providing people with the knowledge they need to manage their Parkinson’s symptoms better themselves and ‘live well’ with Parkinson’s.
Parkinson’s patient John Whipps, from Looe in Cornwall, is taking part in the pilot and said: “I hadn’t seen a Parkinson’s specialist for over a year, and my symptoms were fluctuating. Something in the system needs to change and it’s great that steps like are being taken to raise awareness of the service problem. Hopefully the new service design will make life easier for others like myself living with the condition.” Read more about John’s story in this BBC news article.
Who will it be delivered to?
The service will initially be delivered to 150 patients in Plymouth city, West Devon and East Cornwall, as a pilot. If successful, the team hopes the system could be rolled out across the UK following the project’s completion in March 2020.
What the experts say
Project lead Dr Camille Carroll, Associate Professor in the University of Plymouth’s Institute of Translational and Stratified Medicine (ITSMed) and Consultant Neurologist at UHPNT, said: “The UK prevalence of Parkinson’s disease will increase by a fifth by 2025, so the challenges associated with providing a timely and patient-centred service will also be much higher. To have this project off the ground with the involvement of partners and service users is fantastic.” Hear Camille talking about the project here.
Alongside the SW AHSN, project partners include Cure Parkinson’s Trust, Flourish Workplace, Sheffield Hallam University, Global Kinetics Corporation, Parkinson’s UK, Fre-est, Radboud University, and UCB Pharma – along with people with Parkinson’s and their carers.