The South West learns from the Singapore healthcare system

The South West Academic Health Science Network (SW AHSN) has welcomed an historic delegation from the Singapore Centre for Healthcare Innovation, based at Tan Tock Seng Hospital in Singapore.

The five visitors were in the South West to talk to health and care staff about their decade-long transformation journey and their approach to innovation. By focusing on reducing or automating activities that are time-consuming for staff, they have both improved the patient experience and allowed staff to spend more time with them.

Some examples use technology, such as introducing robotics into the pharmacy department to free up staff to consult with patients. Others are improvements in practice, such as providing nurses a station at each bed bay on a hospital ward instead of only a central base, so they can keep an eye on and respond more quickly to their patients. 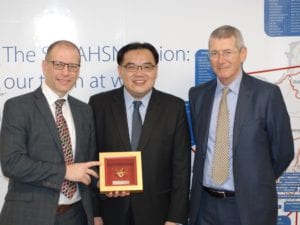 ‘What is interesting is that there are so many people around the world working on the same issues. To find that we can work with one-another and that we don’t need to reinvent the wheel, and we can contextualize what we have learnt from other systems back into ours, has been a very privileged journey.’

Singapore has a population of 5.6m people in an area just 720 square kilometres. Like the South West, there is an increasingly ageing population, so managing long-term conditions and frailty is a priority, as is creating integrated health and care provision. Their vision is to add years of healthy living for people, rather than just reduce ill-health.

The Centre for Healthcare Innovation (CHI) is an open learning platform to co-learn and co-create, driving healthcare innovation and workforce transformation, based at Tan Tock Seng Hospital in Singapore. The SW AHSN and Singapore CHI formally became partners at the end of 2017, and to recognise this new relationship, Eugene Fidelis Soh and his colleagues presented the SW AHSN with a beautiful golden orchid as a gift of friendship.

In future, both partners will strengthen their links developing a fellowship exchange scheme and bringing thought-leaders from Singapore and England together. A short film is available summarising their key themes from the visit.